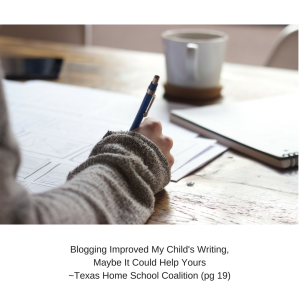 “I’ll only pay attention to your argument and how effectively you state your case. I don’t care about spelling, grammar or punctuation,” I said. My son’s shoulders relaxed. I could sense him exhaling the tension. Friction between us over writing assignments abruptly came to a halt and I could breathe more easily, too.

My son’s weekly assignment quickly became a hit because it released him to write freely without fear of messing up. Spelling in particular had paralyzed him but now he wrote, unrestrained. I also let my son choose the topics that interested him, so long as he defended his position on the subject.

Since I gave him control over the topic, he owned his work in a new way. He felt energized and motivated. It was still an assignment, but it felt less like ‘school’ for him. In fact, it went so well that I gradually nudged him towards two, sometimes three, posts per week.